Russia has withdrawn its troops from the strategic Ukrainian town of Lyman, in a move seen as a significant setback for its campaign in the east. 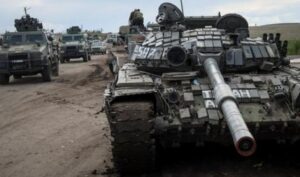 The retreat came amid fears thousands of soldiers would be encircled in the town, Russia’s defence ministry said.

Recapturing Lyman is of strategic significance for Ukraine.

The town had been used as a logistics hub by Russia, and could give Ukrainian troops access to more territory in the Donetsk and Luhansk regions.

Although the blue and yellow colours were flying in Lyman again, fighting was “still going on” there, President Volodymyr Zelensky said in his evening video address.

However, he gave no further details.

The battlefield setback prompted the Chechen leader and hardline Moscow ally, Ramzan Kadyrov, to comment that Russia should consider using low-yield nuclear weapons in the face of such defeats.

Lyman is in Donetsk – one of four partially-occupied Ukrainian regions which Russia declared it was annexing on Friday. Ukraine and its Western allies have dismissed the move as an illegal land-grab.

Russian fighters had been given the chance to surrender, Yurik Sak said, and would face better treatment as prisoners of war than from the Russian military leadership.

Shortly afterwards, the Kremlin said it was withdrawing its forces from the town, using its Soviet-era name of Krasnyi (Red) Lyman, acknowledging that the Ukrainians had “significant superiority in forces” in the area.

Military analysts say that Kyiv currently has momentum in the war, and it has vowed to forge ahead with a counter-offensive to reclaim all territory under occupation.

In a speech on Friday, Mr Zelensky said efforts to “liberate our entire land” would act as proof that international law could not be violated.

Details have emerged of another deadly attack on a convoy of civilians – the second announced in as many days – this time in the north-eastern Kharkiv region. The shelling on 25 September killed 24 people, including 13 children and a pregnant woman, regional head Oleg Sinegubov posted on the Telegram messaging app. Russia has not yet commented.

The UN’s nuclear watchdog, the IAEA, has confirmed with Moscow that Russian forces detained the chief of Ukraine’s Zaporizhzhia nuclear plant – a giant facility controlled by Russian troops. The Russians were trying to force Murashov to let the nuclear power plant be handed over to Russian state nuclear agency Rosatom, according to Ukrainian officials
Russian firefighters are tackling a blaze at the Belbek military airbase in Crimea, where officials say a plane skidded off a runway and caught fire. In August explosions rocked Russia’s Saky military base in Crimea and Ukraine later said that it had hit the base with an air strike.